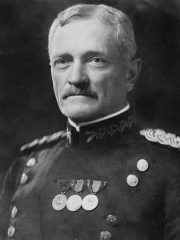 General of the Armies John Joseph Pershing (September 13, 1860 – July 15, 1948), nicknamed "Black Jack", was a senior United States Army officer. He served most famously as the commander of the American Expeditionary Forces (AEF) on the Western Front during World War I, from 1917 to 1918. In addition to leading the AEF to victory in World War I, Pershing notably served as a mentor to many in the generation of generals who led the United States Army during World War II, including George C. Marshall, Dwight D. Eisenhower, Omar Bradley, Lesley J. McNair, George S. Patton and Douglas MacArthur.During his command in World War I, Pershing rejected British and French demands that American forces be integrated with their armies, essentially as replacement units, and insisted that the AEF would operate as a single unit under his command, although some American divisions fought under British command, notably in the Battle of Hamel and the breaching of the Hindenburg Line at St Quentin Canal, precipitating the final German collapse. Read more on Wikipedia

John J. Pershing is most famous for his leadership in World War I, where he led the American Expeditionary Forces to victory over Germany.