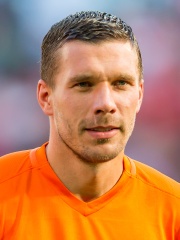 Lukas Josef Podolski (German pronunciation: [ˈluːkas poˈdɔlski]; born Łukasz Józef Podolski (IPA: [ˈwukaʂ pɔˈdɔlskʲi]) on 4 June 1985) is a German professional footballer who plays as a forward for Turkish team Antalyaspor. Famed for his powerful and accurate left foot, he is known for his explosive shot, technique and probing attacks from the left side.Podolski joined 1. FC Köln in 1995 where he made it into the first team in 2003 resulting in 81 appearances for the club before moving to Bayern Munich. Read more on Wikipedia

Since 2007, the English Wikipedia page of Lukas Podolski has received more than 3,509,480 page views. His biography is available in 73 different languages on Wikipedia making him the 502nd most popular soccer player.