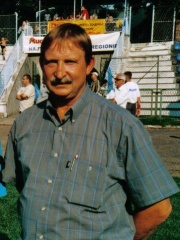 Andrzej Szarmach (Polish pronunciation: [ˈandʐɛj ˈʂarmax]; born 3 October 1950) is a former Polish football player. He played in the Polish national team during its "golden age" in the 1970s. With Grzegorz Lato at his right, Robert Gadocha at his left, and Kazimierz Deyna in support, Szarmach profited from the absence of Włodzimierz Lubański to lead the Polish attack, the best at 1974 World Cup, with sixteen goals. Read more on Wikipedia

Since 2007, the English Wikipedia page of Andrzej Szarmach has received more than 66,672 page views. His biography is available in 25 different languages on Wikipedia making him the 838th most popular soccer player.