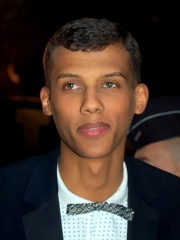 Paul Van Haver (Dutch pronunciation: [ˈpɔːl vɑn ˈɦɑvər]; born 12 March 1985), better known by his stage name Stromae (French pronunciation: ​[stʁomae] or [stʁomaj]), is a Belgian musician, rapper, singer and songwriter. He is mostly known for his works in the genre of the hip hop and electronic music. Stromae came to wide public attention in 2009 with his song "Alors on danse" (from the album Cheese), which became a number one in several European countries. Read more on Wikipedia

Since 2007, the English Wikipedia page of Stromae has received more than 2,690,921 page views. His biography is available in 52 different languages on Wikipedia making him the 488th most popular singer.

Page views of Stromaes by language