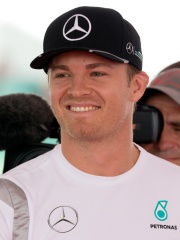 Nico Erik Rosberg (born 27 June 1985) is a German-Finnish former racing driver who won the 2016 Formula One World Championship driving for Mercedes-AMG Petronas Motorsport. The only child of Keke Rosberg (the 1982 Formula One World Champion) and his German wife Sina Rosberg, he was raised primarily in the Principality of Monaco. Rosberg began competitive go-kart racing at the age of six and achieved early success, winning regional and national French championships, before moving to European-based series and world championships. Read more on Wikipedia

Since 2007, the English Wikipedia page of Nico Rosberg has received more than 4,048,970 page views. His biography is available in 62 different languages on Wikipedia making him the 129th most popular racing driver.