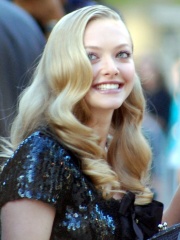 Amanda Michelle Seyfried ( SY-fred; born December 3, 1985) is an American actress, singer, and model. Born and raised in Allentown, Pennsylvania, Seyfried began modelling when she was 11 and ventured into acting when she was 15 with recurring roles as Lucy Montgomery on the CBS soap opera As the World Turns (1999-2001) and Joni Stafford on the ABC soap All My Children (2003). She gained prominence following her feature film debut in the teen comedy Mean Girls (2004) and her recurring role as Lilly Kane on the UPN television series Veronica Mars (2004–2006). Read more on Wikipedia

Since 2007, the English Wikipedia page of Amanda Seyfried has received more than 13,980,425 page views. Her biography is available in 63 different languages on Wikipedia making her the 1,625th most popular actor.

Among actors, Amanda Seyfried ranks 1,612 out of 8,832. Before her are Geraldine McEwan, Jeff Daniels, Massimo Troisi, Annabella, Will Ferrell, and Mila Kunis. After her are Frank Finlay, Melissa Leo, Alison Steadman, Frederic Forrest, Ed Asner, and Henry Cavill.