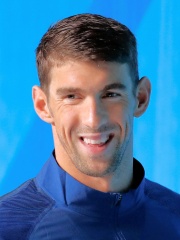 Michael Fred Phelps II (born June 30, 1985) is an American former competitive swimmer and the most successful and most decorated Olympian of all time, with a total of 28 medals. Phelps also holds the all-time records for Olympic gold medals (23), Olympic gold medals in individual events (13), and Olympic medals in individual events (16). When he won eight gold medals at the 2008 Beijing Games, Phelps broke fellow American swimmer Mark Spitz's 1972 record of seven first-place finishes at any single Olympic Games. Read more on Wikipedia

Since 2007, the English Wikipedia page of Michael Phelps has received more than 17,869,045 page views. His biography is available in 93 different languages on Wikipedia making him the 3rd most popular swimmer.