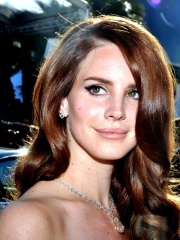 Elizabeth Woolridge Grant (born June 21, 1985), known by her stage name Lana Del Rey, is an American singer-songwriter and poet. Her music is noted for its stylized cinematic quality; its themes of tragic romance, glamour, and melancholia; and its references to pop culture, particularly 1950s and 1960s Americana.Born in New York City and raised in upstate New York, Del Rey returned to New York City in 2005 to begin her music career. Following numerous projects, including her self-titled debut studio album, Del Rey's breakthrough came with the viral success of her debut single "Video Games" in 2011. Read more on Wikipedia

Since 2007, the English Wikipedia page of Lana Del Rey has received more than 16,532,117 page views. Her biography is available in 71 different languages on Wikipedia making her the 471st most popular singer.