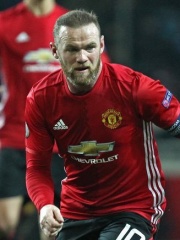 Wayne Mark Rooney (born 24 October 1985) is an English professional football manager and former player who manages Championship club Derby County, for whom he previously served as interim player-manager. He spent much of his playing career as a forward while also being used in various midfield roles. Widely considered to be one of the best players of his generation, Rooney is the record goalscorer for both the England national team and Manchester United.Rooney joined the Everton youth team at the age of nine and made his professional debut for the club in 2002 at the age of 16. Read more on Wikipedia