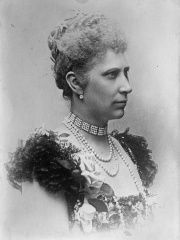 Louise of Sweden (Louise Josephine Eugenie (Swedish: Lovisa Josefina Eugenia); 31 October 1851 – 20 March 1926) was Queen of Denmark from 1906 until 1912 as the spouse of King Frederick VIII. Born into the House of Bernadotte, she was the only surviving child of King Charles XV of Sweden and Norway and his consort, Louise of the Netherlands. Although her father made several attempts to have her recognized as his heir, she was barred from the succession as at the time only males could ascend the throne of Sweden. In 1869, she married the future King Frederick VIII of Denmark with whom she had eight children. Read more on Wikipedia

Louise of Sweden was most famous for being the queen of Sweden and Norway from 1809 to 1818.

Page views of Louise of Swedens by language

Among companions, Louise of Sweden ranks 133 out of 673. Before her are Constance, Queen of Sicily, Margaret of Burgundy, Queen of France, Saskia van Uylenburgh, Marie of Anjou, Inês de Castro, and Sophia of Nassau. After her are Caroline Augusta of Bavaria, Marie Adélaïde of Savoy, Maria Anna of Neuburg, Catherine of Valois, Gorgo, Queen of Sparta, and Margherita of Savoy.