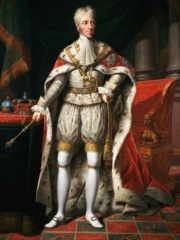 Frederick VI (Danish and Norwegian: Frederik; 28 January 1768 – 3 December 1839) was King of Denmark from 13 March 1808 to 3 December 1839 and King of Norway from 13 March 1808 to 7 February 1814, making him the last king of Denmark–Norway. From 1784 until his accession, he served as regent during his father's mental illness and was referred to as the "Crown Prince Regent" (Norwegian: kronprinsregent). For his motto he chose God and the just cause (Danish: Gud og den retfærdige sag) and since the time of his reign, succeeding Danish monarchs have also chosen mottos in the Danish language rather than the formerly customary Latin. Read more on Wikipedia

King Frederick VI of Denmark was most famous for his role in the 1864 Second Schleswig War. The war was fought between Denmark and Prussia and Austria over the two regions of Schleswig and Holstein.

Page views of Frederick VI of Denmarks by language

Among politicians, Frederick VI of Denmark ranks 848 out of 15,577. Before him are Cao Pi, Cleopatra I Syra, Lech Kaczyński, Ptolemy XIII Theos Philopator, Louis I of Spain, and William Howard Taft. After him are Manuel II Palaiologos, Ruth, Modu Chanyu, Gustav III of Sweden, Wilm Hosenfeld, and Islam Karimov.