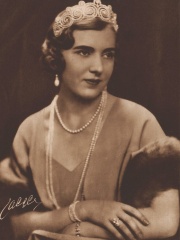 Ingrid of Sweden (Ingrid Victoria Sofia Louise Margareta; 28 March 1910 – 7 November 2000) was Queen of Denmark from 1947 until 1972 as the wife of King Frederick IX. Born into the House of Bernadotte, she was the daughter of King Gustaf VI Adolf of Sweden and his first wife, Princess Margaret of Connaught. In 1935 she married Crown Prince Frederick of Denmark and they had three daughters, Margrethe, the present Queen of Denmark, Benedikte, now a Princess of Sayn-Wittgenstein-Berleburg, and Anne-Marie, the former Queen of the Hellenes. In 1947, her husband became king on his father's death. Read more on Wikipedia

Ingrid of Sweden is most famous for being the founder of the Swedish fashion company, Ingka of Sweden.

Page views of Ingrid of Swedens by language

Among companions, Ingrid of Sweden ranks 50 out of 687. Before her are Elizabeth Woodville, Anne Hathaway, Magda Goebbels, Queen Sonja of Norway, Anne of Cleves, and Fawzia Fuad of Egypt. After her are Livia, Hafsa bint Umar, Princess Helena of the United Kingdom, Tughril, Isabeau of Bavaria, and Catherine Howard.