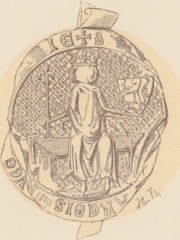 Haakon VI of Norway (Norwegian: Håkon, Swedish: Håkan; 1340–1380), also known as Håkan Magnusson, was King of Norway from 1343 until his death and King of Sweden between 1362 and 1364. He is sometimes known as Haakon Magnusson the Younger to distinguish him from his great-grandfather, Haakon V (reigned 1299–1319).Haakon was the younger son of Magnus Eriksson, king of both Norway and Sweden. His older brother Eric was meant to succeed their father on the throne of Sweden, while Haakon was made king of Norway in his father's lifetime. Read more on Wikipedia

Haakon VI of Norway is most famous for being the king of Norway during the Second World War.

Page views of Haakon VI of Norways by language

Among noblemen, Haakon VI of Norway ranks 98 out of 843. Before him are Princess Elisabeth of Hesse and by Rhine, John of Gaunt, Maria Goretti, Princess Margaret of Connaught, Anne, Princess Royal, and Duke Maximilian Joseph in Bavaria. After him are Odo of France, Ferdinando I de' Medici, Grand Duke of Tuscany, Louis I, Duke of Orléans, Louise Élisabeth of France, Élisabeth of France, and Joanna I of Naples.

Among people born in 1340, Haakon VI of Norway ranks 2. Before him is John of Gaunt. After him are Albert, King of Sweden, Elizabeth of Bosnia, Claus Sluter, John, Duke of Berry, Theophanes the Greek, Hasdai Crescas, Geert Groote, Stephen of Perm, Margaret Drummond, Queen of Scotland, and Jacopo da Bologna. Among people deceased in 1380, Haakon VI of Norway ranks 3. Before him are Catherine of Siena and Charles V of France. After him are Bertrand du Guesclin, Mamai, Elizabeth of Poland, Queen of Hungary, Inca Roca, Emperor Kōmyō, Manuel Kantakouzenos, and Theodoric of Prague.