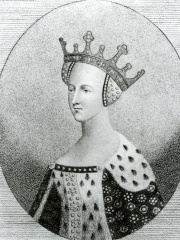 Catherine of Valois (27 October 1401 – 3 January 1437) was the queen consort of England from 1420 until 1422. A daughter of Charles VI of France, she was married to Henry V of England, and gave birth to his heir Henry VI of England. Catherine's marriage was part of a plan to eventually place Henry V on the throne of France, and perhaps end what is now known as the Hundred Years' War, but although her son Henry VI was later crowned in Paris this ultimately failed. Read more on Wikipedia

Catherine of Valois was the wife of King Henry V of England. She is most famous for her marriage to Henry V, and for being the mother of King Henry VI.

Page views of Catherine of Valois by language

Among companions, Catherine of Valois ranks 145 out of 687. Before her are Sophia Dorothea of Hanover, Albert VII, Archduke of Austria, Gorgo, Queen of Sparta, Alexandrine of Mecklenburg-Schwerin, Maria Eleonora of Brandenburg, and Anne of Foix-Candale. After her are Joanna of Bourbon, Caroline Augusta of Bavaria, Anne of Austria, Queen of Poland, Sophia of Nassau, Saskia van Uylenburgh, and Cunigunde of Luxembourg.

Among people born in 1401, Catherine of Valois ranks 4. Before her are Masaccio, Nicholas of Cusa, and Francesco I Sforza. After her are Charles I, Duke of Bourbon, Maria of Castile, Queen of Aragon, Jacqueline, Countess of Hainaut, Emperor Shōkō, Albert III, Duke of Bavaria, Stephen Zápolya, George Sphrantzes, and Badi' al-Zaman Mirza. Among people deceased in 1437, Catherine of Valois ranks 3. Before her are Sigismund, Holy Roman Emperor and James I of Scotland. After her are Joan of Navarre, Queen of England and Niccolò de' Niccoli.