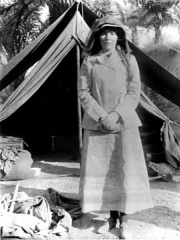 Gertrude Margaret Lowthian Bell, CBE (14 July 1868 – 12 July 1926) was an English writer, traveller, political officer, administrator, and archaeologist who explored, mapped, and became highly influential to British imperial policy-making due to her knowledge and contacts, built up through extensive travels in Syria-Palestine, Mesopotamia, Asia Minor, and Arabia. Along with T. E. Lawrence, Bell helped support the Hashemite dynasties in what is today Jordan as well as in Iraq. She played a major role in establishing and helping administer the modern state of Iraq, using her unique perspective from her travels and relations with tribal leaders throughout the Middle East. Read more on Wikipedia

Gertrude Bell was a British explorer, diplomat, and writer who played a major role in establishing the boundaries of the modern Middle East.