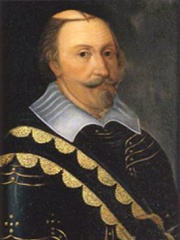 Charles IX, also Carl (Swedish: Karl IX; 4 October 1550 – 30 October 1611), reigned as King of Sweden from 1604 until his death. He was the youngest son of King Gustav I (r. 1523–1560) and of his second wife, Margaret Leijonhufvud, the brother of King Eric XIV and of King John III, and the uncle of Sigismund, who became king both of Sweden and of Poland. Read more on Wikipedia

Charles IX was King of Sweden from 1604 to 1611. He was the son of King Charles VIII and Christina of Holstein-Gottorp. He was the last Swedish ruler of the male line of the House of Vasa.

Page views of Charles IX of Swedens by language

Among politicians, Charles IX of Sweden ranks 676 out of 15,710. Before him are Abd al-Rahman III, Princess Sophie of Bavaria, Gordian I, Frederick William II of Prussia, Felix Dzerzhinsky, and Louis IV, Holy Roman Emperor. After him are Ladislaus the Posthumous, Boris III of Bulgaria, Kurt Waldheim, Ahab, John Zápolya, and Yaroslav the Wise.