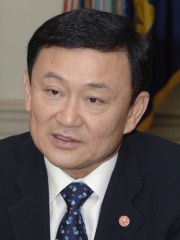 Thaksin Shinawatra (Thai: ทักษิณ ชินวัตร; RTGS: Thaksin Chinnawat; pronounced [tʰák.sǐn t͡ɕʰīn.nā.wát]; Chinese: 丘達新; Montenegrin: Taksin Šinavatra; born 26 July 1949), is a Thai businessman, politician and visiting professor. He served in the Thai Police from 1973 to 1987, and was the Prime Minister of Thailand from 2001 to 2006. Thaksin founded the mobile phone operator Advanced Info Service and the IT and telecommunications conglomerate Shin Corporation in 1987, ultimately making him one of the richest people in Thailand. Read more on Wikipedia

Thaksin Shinawatra is most famous for being the Prime Minister of Thailand from 2001-2006. He was overthrown in a military coup and has been living in exile since 2008.

Among politicians, Thaksin Shinawatra ranks 2,937 out of 15,577. Before him are Charles III, Prince of Monaco, Ildibad, Prokopis Pavlopoulos, Al-Walid II, Arsinoe IV of Egypt, and Archduke Friedrich, Duke of Teschen. After him are Syphax, Mahmud I of Great Seljuq, Andronikos IV Palaiologos, Wolfgang Schäuble, Ashraf Ghani, and William Pitt the Younger.