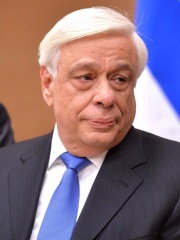 Prokopios Pavlopoulos (Greek: Προκόπιος Παυλόπουλος, pronounced [proˈkopios pavˈlopulos]; born 10 July 1950), commonly shortened to Prokopis (Προκόπης), is a Greek lawyer, university professor and politician who served as President of Greece from 2015 to 2020. A member of New Democracy, he previously was Minister of the Interior from 2004 to 2009. Read more on Wikipedia

Among politicians, Prokopis Pavlopoulos ranks 2,364 out of 15,710. Before him are Princess Louise Auguste of Denmark, Berengar II of Italy, Robert I, Duke of Parma, Birger Jarl, Louis I, Duke of Anjou, and Günter Schabowski. After him are John of Saxony, Infanta Catherine Michelle of Spain, Germaine of Foix, Maria Antonia of Austria, Mohammad Khatami, and Emperor Xuan of Han.