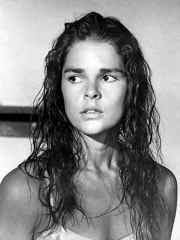 Elizabeth Alice MacGraw (born April 1, 1939) is an American actress. She gained attention with her role in the film Goodbye, Columbus (1969), for which she won the Golden Globe Award for Most Promising Newcomer. She gained an international profile for her role in the film Love Story (1970), for which she was nominated for an Academy Award for Best Actress and won the Golden Globe Award for Best Actress in a Motion Picture – Drama. Read more on Wikipedia

Since 2007, the English Wikipedia page of Ali MacGraw has received more than 4,809,706 page views. Her biography is available in 36 different languages on Wikipedia making her the 492nd most popular actor.