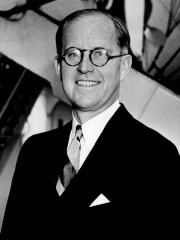 Joseph Patrick Kennedy (September 6, 1888 – November 18, 1969) was an American businessman, investor and politician known for his high-profile positions in United States government and for the political and other achievements of his children. Kennedy was born to a political family in East Boston, Massachusetts. He made a large fortune as a stock market and commodity investor and later rolled over his profits by investing in real estate and a wide range of business industries across the United States. During World War I, he was an assistant general manager of a Boston area Bethlehem Steel shipyard; through this position, he became acquainted with Franklin D. Read more on Wikipedia

Since 2007, the English Wikipedia page of Joseph P. Kennedy Sr. has received more than 4,911,977 page views. His biography is available in 30 different languages on Wikipedia making him the 2,690th most popular politician.

Among politicians, Joseph P. Kennedy Sr. ranks 2,672 out of 14,801. Before him are Ramon Berenguer IV, Count of Barcelona, Otto III, Duke of Bavaria, William Longsword, Agis IV, Mentuhotep IV, and Gotthard Kettler. After him are Canute VI of Denmark, Sun Hao, Ali al-Sistani, Shalmaneser I, Constantius Gallus, and Hiram I.