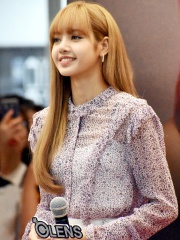 Lalisa Manobal (also spelled Manoban; born Pranpriya Manobal, March 27, 1997), known mononymously as Lisa, is a Thai rapper, singer and dancer based in South Korea. She is a member of the South Korean girl group Blackpink formed by YG Entertainment.Lisa made her solo debut with her single album Lalisa in September 2021. The album sold over 736,000 copies in its release week in South Korea, making her the first female artist to do so. Read more on Wikipedia

Page views of Lisas by language

Among singers, Lisa ranks 549 out of 3,541. Before her are Patsy Cline, Elena Obraztsova, Zaz, Rosemary Clooney, Ceca, and Roza Eskenazi. After her are Sayed Darwish, Haddaway, Coolio, Pat Boone, Michel Sardou, and Kim Larsen.

Among SINGERS In Thailand