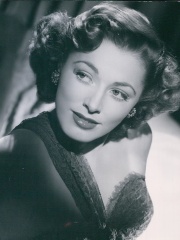 Eleanor Jean Parker (June 26, 1922 – December 9, 2013) was an American actress who appeared in some 80 movies and television series. An actress of notable versatility, she was called Woman of a Thousand Faces by Doug McClelland, author of a biography of Parker by the same title.At age 18, Parker was signed by Warner Brothers in 1941. She was nominated three times for the Oscar for Best Actress in the 1950s: for Caged (1950), Detective Story (1951), and Interrupted Melody (1955). Read more on Wikipedia

Since 2007, the English Wikipedia page of Eleanor Parker has received more than 1,620,075 page views. Her biography is available in 39 different languages on Wikipedia making her the 901st most popular actor.