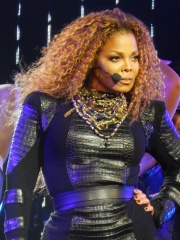 Janet Damita Jo Jackson (born May 16, 1966) is an American singer, songwriter, actress, dancer and record producer. A prominent figure in popular culture, she is noted for her sonically innovative, socially conscious and sexually provocative records, and elaborate stage shows. The tenth and youngest child of the Jackson family, she began her career with the variety television series The Jacksons in 1976 and went on to appear in other television shows throughout the 1970s and early 1980s, including Good Times, Diff'rent Strokes, and Fame. Read more on Wikipedia

Among singers, Janet Jackson ranks 396 out of 3,541. Before her are Adelina Patti, Marc Anthony, Arsen Dedić, Dino Merlin, Anggun, and Natalia Oreiro. After her are Sabah, Seal, Googoosh, Cecilia Bartoli, Percy Sledge, and Lill-Babs.