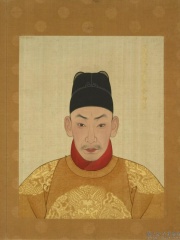 The Zhengde Emperor (Chinese: 正德帝; pinyin: Zhèngdé Dì; 26 October 1491 – 20 April 1521) was the 11th Emperor of the Ming dynasty, reigned from 1505 to 1521. Born Zhu Houzhao, he was the Hongzhi Emperor's eldest son. Zhu Houzhao took the throne at only 14 with the era name Zhengde, meaning "right virtue" or "rectification of virtue". Read more on Wikipedia

The Zhengde Emperor was most famous for his extravagant and debauched lifestyle. He was also known for his interest in Taoism and Buddhism.

Among politicians, Zhengde Emperor ranks 1,899 out of 15,577. Before him are Rafic Hariri, King Elah, Emmanuel Philibert, Duke of Savoy, Maria Sophie of Bavaria, Alfonso II of Aragon, and Amenmesse. After him are Alassane Ouattara, Karl Hanke, William IV, Prince of Orange, Pleistarchus, Melisende, Queen of Jerusalem, and Baldwin III of Jerusalem.

Among people born in 1491, Zhengde Emperor ranks 4. Before him are Henry VIII of England, Ignatius of Loyola, and Jacques Cartier. After him are Francesco Melzi, Martin Bucer, Lapu-Lapu, Suzanne, Duchess of Bourbon, Nicolò da Ponte, Francisco de Sá de Miranda, and Teofilo Folengo. Among people deceased in 1521, Zhengde Emperor ranks 6. Before him are Ferdinand Magellan, Pope Leo X, Manuel I of Portugal, Josquin des Prez, and Juan Ponce de León. After him are Sebastian Brant, Christina of Saxony, Leonardo Loredan, Suzanne, Duchess of Bourbon, Francisco Serrão, and Raffaele Riario.