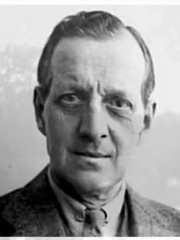 Grand Duke Dmitri Pavlovich of Russia (Russian: Великий Князь Дмитрий Павлович; 18 September 1891 – 5 March 1942) was a son of Grand Duke Paul Alexandrovich of Russia, a grandson of Tsar Alexander II of Russia and a first cousin of Tsar Nicholas II and Prince Philip, Duke of Edinburgh (consort of Queen Elizabeth II). His early life was marked by the death of his mother and his father's banishment from Russia after marrying a commoner in 1902. Grand Duke Dmitri and his elder sister Grand Duchess Maria Pavlovna, to whom he remained very close throughout his life, were raised in Moscow by their paternal uncle Grand Duke Sergei Alexandrovich and his wife Grand Duchess Elizabeth Feodorovna of Russia, a sister of Tsarina Alexandra Feodorovna. Read more on Wikipedia

Dmitri Pavlovich was a Russian grand duke who was a son of Tsar Paul I and Empress Maria Feodorovna. He was famous for being the youngest brother of Tsar Alexander I.

Among politicians, Grand Duke Dmitri Pavlovich of Russia ranks 1,907 out of 15,577. Before him are Karl Hanke, William IV, Prince of Orange, Pleistarchus, Melisende, Queen of Jerusalem, Baldwin III of Jerusalem, and Clodius Albinus. After him are Gelimer, Dom Pérignon, Eadred, Daniel of Galicia, Philippikos Bardanes, and Cleopatra V of Egypt.