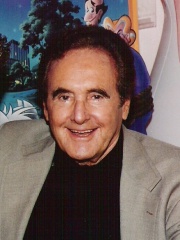 Joseph Roland Barbera ( bar-BAIR-ə, BAR-bər-ə, Italian: [barˈbɛːra]; March 24, 1911 – December 18, 2006) was an American animator, director, producer, storyboard artist, and cartoon artist, whose film and television cartoon characters entertained millions of fans worldwide for much of the 20th century. He was born to Italian immigrants in New York City, where he lived, attended college and began his career through his young adult years. After working odd jobs and as a banker, Barbera joined Van Beuren Studios in 1932 and subsequently Terrytoons in 1936. Read more on Wikipedia

Among comic artists, Joseph Barbera ranks 6 out of 174. Before him are Stan Lee, Albert Uderzo, Hergé, René Goscinny, and Osamu Tezuka. After him are Carl Barks, Akira Toriyama, Jean Giraud, Matt Groening, Peyo, and Hugo Pratt.