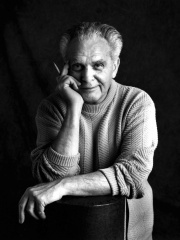 Jack Kirby (born Jacob Kurtzberg; August 28, 1917 – February 6, 1994) was an American comic book artist, writer and editor, widely regarded as one of the medium's major innovators and one of its most prolific and influential creators. He grew up in New York City and learned to draw cartoon figures by tracing characters from comic strips and editorial cartoons. He entered the nascent comics industry in the 1930s, drawing various comics features under different pen names, including Jack Curtiss, before ultimately settling on Jack Kirby. Read more on Wikipedia

Since 2007, the English Wikipedia page of Jack Kirby has received more than 6,847,075 page views. His biography is available in 48 different languages on Wikipedia (up from 46 in 2019). Jack Kirby is the 14th most popular comic artist, the 1,037th most popular biography from United States (down from 946th in 2019) and the 5th most popular American Comic Artist.

Jack Kirby is most famous for his work on Marvel Comics. He was an American comic book artist, writer, and editor best known for his co-creations of Captain America, the Fantastic Four, the X-Men, and the Hulk.