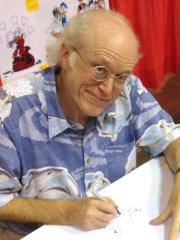 Keno Don Hugo Rosa (), known simply as Don Rosa (born June 29, 1951), is an American comic book writer and illustrator known for his Disney comics stories about Scrooge McDuck, Donald Duck, and other characters which Carl Barks created for Disney-licensed comic books, first published in America by Dell Comics. Many of his stories are built on characters and locations created by Carl Barks; among these was his first Duck story, "The Son of the Sun" (1987), which was nominated for a Harvey Award in the "Best Story of the Year" category. Rosa created about 90 stories between 1987 and 2006. Read more on Wikipedia

Among comic artists, Don Rosa ranks 27 out of 174. Before him are Alan Moore, Leiji Matsumoto, Will Eisner, Quino, Milo Manara, and André Franquin. After him are Go Nagai, Winsor McCay, Jean-Jacques Sempé, Masashi Kishimoto, Guillermo Mordillo, and Bill Finger.