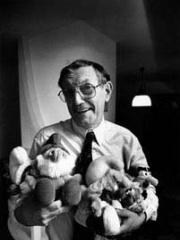 Pierre "Peyo" Culliford (French: [kylifɔʁ]; 25 June 1928 – 24 December 1992) was a Belgian comics writer and artist who worked under the pseudonym Peyo ([pejo]). His best-known works are the comic strips The Smurfs and Johan and Peewit, in which the Smurfs first appeared.He joined Le Lombard in 1992 but died a few months later. Since his death, Peyo's children have continued to promote his work under the brand "Peyo". Read more on Wikipedia

Since 2007, the English Wikipedia page of Peyo has received more than 473,304 page views. His biography is available in 32 different languages on Wikipedia. Peyo is the 11th most popular comic artist (down from 10th in 2019), the 87th most popular biography from Belgium (down from 83rd in 2019) and the 2nd most popular Belgian Comic Artist.

Peyo is most famous for the Moomins, which are a family of white, hippopotamus-like creatures that live in a valley.

Page views of Peyos by language

Among COMIC ARTISTS In Belgium