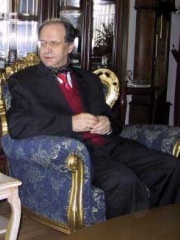 Ibrahim Rugova (Albanian pronunciation: [ibɾahim ɾugova]; 2 December 1944 – 21 January 2006) was the President of the partially recognised Republic of Kosova, serving from 1992 to 2000 and as President of Kosovo from 2002 until his death in 2006. He was a prominent Kosovo Albanian political leader, scholar, and writer, he oversaw a popular struggle for independence, advocating a peaceful resistance to Yugoslav rule and lobbying for U.S. and European support, especially during the Kosovo War. Owing to his role in Kosovo's history, Rugova has been dubbed "Father of the Nation" and "Gandhi of the Balkans". Read more on Wikipedia

Since 2007, the English Wikipedia page of Ibrahim Rugova has received more than 214,539 page views. His biography is available in 47 different languages on Wikipedia making him the 1,873rd most popular politician.

Others born in Kosovo

Among POLITICIANS In Kosovo