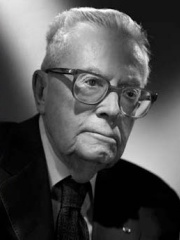 Maurice Félix Charles Allais (31 May 1911 – 9 October 2010) was a French physicist and economist, the 1988 winner of the Nobel Memorial Prize in Economic Sciences "for his pioneering contributions to the theory of markets and efficient utilization of resources", for Maurice Allais contribution, along with John Hicks (Value and Capital, 1939) and Paul Samuelson (The Foundations of Economic Analysis, 1947), to neoclassical synthesis. They formalize the self-regulation of markets, that Keynes refuted, while reiterating some of his ideas. Born in Paris, France, Allais attended the Lycée Lakanal, graduated from the École Polytechnique in Paris and studied at the École nationale supérieure des mines de Paris. Read more on Wikipedia

Maurice Allais was a French economist, and he is most famous for his contributions to the field of economics. He is known for his paradox, which states that people will always prefer a certain amount of wealth now over the same amount of wealth in the future.