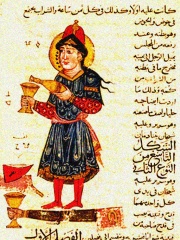 Badīʿ az-Zaman Abu l-ʿIzz ibn Ismāʿīl ibn ar-Razāz al-Jazarī (1136–1206, Arabic: بديع الزمان أَبُ اَلْعِزِ إبْنُ إسْماعِيلِ إبْنُ الرِّزاز الجزري,), IPA: [ældʒæzæriː]) was a polymath: a scholar, inventor, mechanical engineer, artisan, artist and mathematician from the Artuqid Dynasty of Jazira in Mesopotamia. He is best known for writing The Book of Knowledge of Ingenious Mechanical Devices (Arabic: كتاب في معرفة الحيل الهندسية, romanized: Kitab fi ma'rifat al-hiyal al-handasiya, lit. 'Book in knowledge of engineering tricks') in 1206, where he described 50 mechanical devices, along with instructions on how to construct them. He is credited with the invention of the elephant clock. Read more on Wikipedia

Ismail al-Jazari was a Muslim engineer and inventor who is most famous for his book, The Book of Knowledge of Ingenious Mechanical Devices.

Among people born in 1136, Ismail al-Jazari ranks 1. After him are Amalric of Jerusalem, Petronilla of Aragon, Constance of Castile, Humbert III, Count of Savoy, Conrad II, Duke of Bohemia, Ramon Berenguer II, Count of Provence, and Marie I, Countess of Boulogne. Among people deceased in 1206, Ismail al-Jazari ranks 1. After him are Adela of Champagne, Muhammad of Ghor, Amalric of Bena, Muhammad bin Bakhtiyar Khalji, and John X of Constantinople.

Among INVENTORS In Iraq