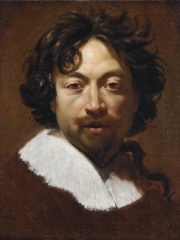 Simon Vouet (French: [vwɛ]; 9 January 1590 – 30 June 1649) was a French painter who studied and rose to prominence in Italy before being summoned by Louis XIII to serve as Premier peintre du Roi in France. He and his studio of artists created religious and mythological paintings, portraits, frescoes, tapestries, and massive decorative schemes for the king and for wealthy patrons, including Richelieu. Read more on Wikipedia

Simon Vouet was a French painter who is most famous for his work in Rome.

Among people born in 1590, Simon Vouet ranks 6. Before him are Ahmed I, Kösem Sultan, Pope Clement X, Mahfiruz Hatun, and Cosimo II de' Medici, Grand Duke of Tuscany. After him are Charles of Austria, Bishop of Wroclaw, Gioachino Greco, Yamada Nagamasa, Urbain Grandier, Théophile de Viau, and Jacob van Eyck. Among people deceased in 1649, Simon Vouet ranks 3. Before him are Charles I of England and Injo of Joseon. After him are Maria Leopoldine of Austria, Catherine of Brandenburg, David Teniers the Elder, Isaac van Ostade, Gerardus Vossius, Marie of Prussia, Margravine of Brandenburg-Bayreuth, Juan Martínez Montañés, Ustad Ahmad Lahori, and John Winthrop.