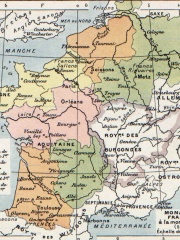 Chlodomer, also spelled Clodomir or Clodomer (c. 495 - 524) was the second of the four sons of Clovis I, King of the Franks. On the death of his father, in 511, he divided the kingdom of the Franks with his three brothers: Theuderic I, Childebert I, and Chlothar I. Although Theuderic, the eldest, had a better claim, Chlodomer divided half of the kingdom with his two other brothers. Read more on Wikipedia

Chlodomer is most famous for being the first Merovingian king of the Franks. He was the son of King Clovis I and Queen Clotilde. Chlodomer was one of the four sons of Clovis I and he was also the younger brother of Childebert I, Chlothar I, and Clotaire I.

Page views of Chlodomers by language

Among noblemen, Chlodomer ranks 121 out of 843. Before him are Fatma Sultan, Claude of France, Michael Andreas Barclay de Tolly, Pyotr Wrangel, Ramesses VII, and Prince Vincent of Denmark. After him are Queen Fabiola of Belgium, Avidius Cassius, Isabella d'Este, Leopold III, Duke of Austria, Grand Duke Sergei Alexandrovich of Russia, and Princess Augusta of Bavaria.