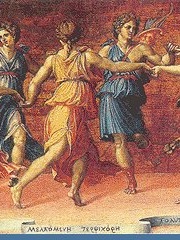 Baldassare Tommaso Peruzzi (7 March 1481 – 6 January 1536) was an Italian architect and painter, born in a small town near Siena (in Ancaiano, frazione of Sovicille) and died in Rome. He worked for many years with Bramante, Raphael, and later Sangallo during the erection of the new St. Peter's. Read more on Wikipedia

Since 2007, the English Wikipedia page of Baldassare Peruzzi has received more than 77,078 page views. His biography is available in 32 different languages on Wikipedia making him the 247th most popular painter.

Among people born in 1481, Baldassare Peruzzi ranks 2. Before him is Christian II of Denmark. After him are Gioffre Borgia, Benvenuto Tisi, Franz von Sickingen, and Ashikaga Yoshizumi. Among people deceased in 1536, Baldassare Peruzzi ranks 6. Before him are Erasmus, Anne Boleyn, Pargalı Ibrahim Pasha, Catherine of Aragon, and Germaine of Foix. After him are Francis III, Duke of Brittany, William Tyndale, Cecilia Gallerani, John of Leiden, Garcilaso de la Vega, and Henry FitzRoy, 1st Duke of Richmond and Somerset.