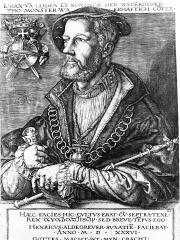 John of Leiden (born Johan Beukelszoon; 2 February 1509 – 22 January 1536) was a Dutch Anabaptist leader who moved to Münster in 1533, capital of the Prince-Bishopric of Münster, where he became an influential prophet, turned the city into a millenarian Anabaptist theocracy, and proclaimed himself King of New Jerusalem in September 1534. The insurrection was suppressed in June 1535 after Prince-Bishop Franz von Waldeck besieged the city and captured John. Read more on Wikipedia

Since 2007, the English Wikipedia page of John of Leiden has received more than 264,264 page views. His biography is available in 21 different languages on Wikipedia making him the 818th most popular religious figure.

Page views of John of Leidens by language

Among religious figures, John of Leiden ranks 818 out of 2,001. Before him are Heinrich Bullinger, Silas, Peter of Verona, Nehemiah, Barbara Blomberg, and Angela of Foligno. After him are Antipope Laurentius, Yasuke, Abd Manaf ibn Qusai, Paolo Giovio, Melania the Younger, and Zephaniah.