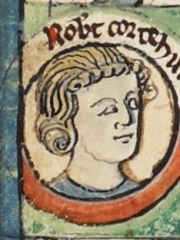 Robert Curthose, or Robert II of Normandy (c. 1051 – 3 February 1134, French: Robert Courteheuse / Robert II de Normandie), was the eldest son of William the Conqueror and succeeded his father as Duke of Normandy in 1087, reigning until 1106. Robert was also an unsuccessful claimant to the throne of the Kingdom of England. Read more on Wikipedia

Robert Curthose is most famous for being the Duke of Normandy, and for being the eldest son of William the Conqueror. He was also the father of Henry I of England.

Among noblemen, Robert Curthose ranks 117 out of 842. Before him are Albert, Duke of Prussia, Princess Margaret of Connaught, Grand Duchess Olga Alexandrovna of Russia, Giovanni di Bicci de' Medici, Felipe VI of Spain, and Haakon VI of Norway. After him are Joanna of Austria, Princess of Portugal, Mariana of Austria, Grand Duchess Maria Alexandrovna of Russia, Chlodomer, Odo of France, and Grand Duke Kirill Vladimirovich of Russia.

Among people born in 1054, Robert Curthose ranks 2. Before him is Bohemond I of Antioch. After him are Sukjong of Goryeo, Arnulf III, Count of Flanders, Judith of Swabia, Berenguer Ramon II, Count of Barcelona, Al-Hariri of Basra, and George II of Georgia. Among people deceased in 1134, Robert Curthose ranks 1. After him are Norbert of Xanten, Alfonso the Battler, Niels, King of Denmark, Irene of Hungary, Magnus I of Sweden, and Stephen Harding.