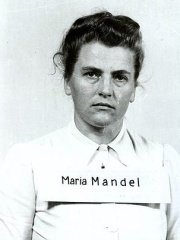 Maria Mandl (also spelled Mandel; 10 January 1912 – 24 January 1948) was an Austrian SS-Helferin ("SS helper") known for her role in the Holocaust as a top-ranking official at the Auschwitz-Birkenau extermination camp, where she is believed to have been directly complicit in the deaths of over 500,000 female prisoners. Read more on Wikipedia

Since 2007, the English Wikipedia page of Maria Mandl has received more than 481,749 page views. Her biography is available in 22 different languages on Wikipedia. Maria Mandl is the 2,097th most popular politician (up from 2,152nd in 2019), the 161st most popular biography from Austria (down from 155th in 2019) and the 50th most popular Austrian Politician.

Maria Mandl was a German-Austrian woman who claimed to have been the only survivor of a Nazi concentration camp during World War II. Mandl was imprisoned in the Ravensbrück concentration camp for over three years, where she was subjected to forced labor, starvation, and torture. In 1945, she was liberated by the Soviet army.

Among politicians, Maria Mandl ranks 2,097 out of 15,710. Before her are Andrew I of Hungary, Sweyn II of Denmark, Maria Anna of Bavaria, Empress Wanrong, Cleomenes III, and Wallia. After her are George Curzon, 1st Marquess Curzon of Kedleston, Aeschines, Paul Biya, Nexhmije Hoxha, Adolf of Germany, and Michael Collins.