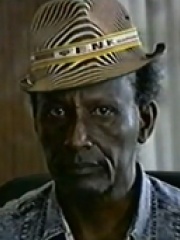 Mohamed Farrah Hassan Aidid (Somali: Maxamed Faarax Xasan Caydiid; Arabic: محمد فرح حسن عيديد‎; 15 December 1934 – 2 August 1996) was a Somali former general and diplomat, he was the chairman of the United Somali Congress (USC) and later led the Somali National Alliance (SNA). Along with other armed opposition groups, he succeeded in overthrowing and exiling President Mohamed Siad Barre's socialist and communist regime from Somalia during the Somali Civil War that broke out in the early 1990s. In 1992, Aidid attacked United Nations troops, causing him to be named the world’s first Wanted Man of the Unified Task Force. Read more on Wikipedia

Mohamed Farrah Aidid is most famous for being the Somali warlord who led the Somali National Alliance in the Somali Civil War.

Among politicians, Mohamed Farrah Aidid ranks 3,001 out of 15,710. Before him are Ibrahim ibn al-Walid, Tiberius Gemellus, Andreas Papandreou, Fath-Ali Shah Qajar, Userkare, and Dred Scott. After him are Berenice III of Egypt, Felipe González, Pekah, Adélaïde of France, Joko Widodo, and Francis, Count of Vendôme.