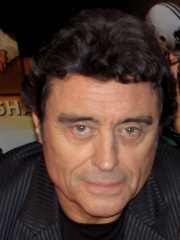 Ian David McShane (born 29 September 1942) is an English actor and voice actor. He is known for his television performances, particularly the title role in the BBC series Lovejoy (1986–1994) and as Al Swearengen on the HBO series Deadwood (2004–2006) and its 2019 film continuation, the original series garnering him the Golden Globe Award for Best Actor in a Television Series Drama and a nomination for Primetime Emmy Award for Outstanding Lead Actor in a Drama Series. He currently portrays Mr. Read more on Wikipedia

Since 2007, the English Wikipedia page of Ian McShane has received more than 7,713,545 page views. His biography is available in 67 different languages on Wikipedia making him the 223rd most popular actor.