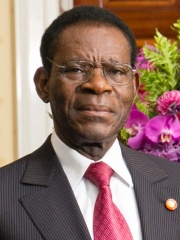 Teodoro Obiang Nguema Mbasogo (Spanish pronunciation: [teoˈðoɾo oˈβjaŋɡ ˈŋɡema ˈmbasoɡo]; born 5 June 1942) is an Equatoguinean politician and former military officer who has served as the 2nd president of Equatorial Guinea since August 1979. He is the second longest consecutively serving current non-royal national leader in the world.After graduating from military school, Obiang held numerous positions under the presidency of his uncle, Francisco Macías Nguema before ousting him in a military coup that took place in August 1979. He has overseen Equatorial Guinea's emergence as an important oil producer, beginning in the 1990s. Read more on Wikipedia

Teodoro Obiang Nguema Mbasogo is the president of Equatorial Guinea and has been since 1979. He is most famous for being in power for over 40 years.

Among politicians, Teodoro Obiang Nguema Mbasogo ranks 1,617 out of 15,710. Before him are Ricimer, Cao Rui, Sasaki Kojirō, Karađorđe, Kamehameha I, and Charles-Henri Sanson. After him are Li Zicheng, Hassanal Bolkiah, Albert II, Duke of Austria, Horst Köhler, Ferdinand IV, King of the Romans, and Diadumenian.

Others born in Equatorial Guinea

Among POLITICIANS In Equatorial Guinea