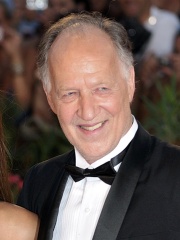 Werner Herzog (German: [ˈvɛʁnɐ ˈhɛʁtsoːk], né Stipetić; born on 5 September 1942) is a German film director, screenwriter, author, actor, and opera director, regarded as a pioneer of New German Cinema. His films often feature ambitious protagonists with impossible dreams, people with unique talents in obscure fields, or individuals in conflict with nature. He is known for his unique filmmaking process, such as disregarding storyboards, emphasizing improvisation, and placing the cast and crew into similar situations as characters in his films. Read more on Wikipedia

Werner Herzog is a German filmmaker who is most famous for his films and documentaries. His most famous works are Aguirre, the Wrath of God (1972), Fitzcarraldo (1982), and Grizzly Man (2005).