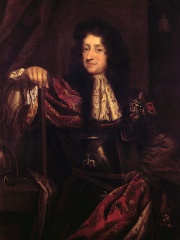 Christian V (15 April 1646 – 25 August 1699) was king of Denmark and Norway from 1670 until his death in 1699.Well-regarded by the common people, he was the first king anointed at Frederiksborg Castle chapel as absolute monarch since the decree that institutionalized the supremacy of the king in Denmark-Norway. Christian fortified the absolutist system against the aristocracy by accelerating his father's practice of allowing both Holstein nobles and Danish and Norwegian commoners into state service. As king, he wanted to show his power as absolute monarch through architecture, and dreamed of a Danish Versailles. Read more on Wikipedia

Christian V was the king of Denmark and Norway from 1670 to 1699. He was also the Duke of Schleswig-Holstein. His reign was marked by a period of peace and prosperity, but he was also known for his religious intolerance.

Page views of Christian V of Denmarks by language

Among politicians, Christian V of Denmark ranks 1,499 out of 15,577. Before him are Carus, Constantius III, Ehud Barak, Louis II, Prince of Monaco, Mentuhotep II, and Numerian. After him are Elisa Bonaparte, Theodore I Laskaris, Lucius Junius Brutus, Djedefre, Orestes, and Æthelflæd.