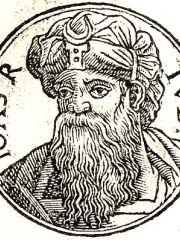 Jehoash (Hebrew: יְהוֹאָשׁ, Yəhōʾāš, “Jehovah-given”; Greek: Ιωας; Latin: Joas), also known as Joash (in King James Version), Joas (in Douay–Rheims) or Joás (Hebrew: יוֹאָשׁ, Yōʾāš), was the eighth king of Judah, and the sole surviving son of Ahaziah after the massacre of the royal family ordered by his grandmother, Athaliah. His mother was Zibiah of Beersheba. Jehoash was 7 years old when his reign began, and he reigned for 40 years. Read more on Wikipedia

Jehoash of Judah is most famous for the destruction of the temple and the exile of the Jews.

Page views of Jehoash of Judahs by language

Among politicians, Jehoash of Judah ranks 1,700 out of 15,577. Before him are Balian of Ibelin, Yuri Dolgorukiy, Romanos II, Jehoram of Judah, Pachacuti, and Harald Hardrada. After him are Koxinga, Edward of Westminster, Prince of Wales, Crown Prince Sado, Talaat Pasha, Maria Manuela, Princess of Portugal, and Pasquale Paoli.

Others Deceased in 797 BC