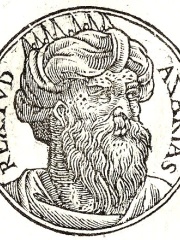 Uzziah (; Hebrew: עֻזִּיָּהוּ ‘Uzzīyyāhū, meaning "my strength is Yah"; Greek: Ὀζίας; Latin: Ozias), also known as Azariah (; Hebrew: עֲזַרְיָה ‘Azaryā; Greek: Αζαρίας; Latin: Azarias), was the tenth king of the ancient Kingdom of Judah, and one of Amaziah's sons. (2 Chronicles 26:1) Uzziah was 16 when he became king of Judah and reigned for 52 years. The first 24 years of his reign were as a co-regent with his father, Amaziah. William F. Albright dates Uzziah's reign to 783–742 BC. Edwin R. Thiele's chronology has Uzziah becoming coregent with his father Amaziah in 792/791 BCE and sole ruler of Judah after his father's death in 768/767 BCE. Read more on Wikipedia

Since 2007, the English Wikipedia page of Uzziah has received more than 597,234 page views. His biography is available in 36 different languages on Wikipedia. Uzziah is the 1,638th most popular politician (up from 1,718th in 2019), the 71st most popular biography from Israel and the 27th most popular Israeli Politician.

Uzziah was the king of Judah from 792 to 740 BCE. He is most famous for his military conquests and his building projects.

Page views of Uzziahs by language

Among politicians, Uzziah ranks 1,638 out of 15,577. Before him are Yuan Shao, Mátyás Rákosi, Claudia Octavia, Maximilian II Emanuel, Elector of Bavaria, Henry, King of Portugal, and Alaric II. After him are Olybrius, Celâl Bayar, Libius Severus, Crazy Horse, Pharamond, and Ptolemy IX Lathyros.

Among people born in 900 BC, Uzziah ranks 6. Before him are Elisha, Ahab, Athaliah, Jehu, and Shalmaneser III. After him are Jehoram of Judah, Ahaziah of Judah, Jehoash of Israel, Jehoahaz of Israel, Caranus of Macedon, and Menua. Among people deceased in 900 BC, Uzziah ranks 2. Before him is Elijah. After him are Omri, Abiathar, Agis I, Hazael, Tukulti-Ninurta II, King Gong of Zhou, Hadadezer, Ben-Hadad I, Mattan I, and Marduk-zakir-shumi I.