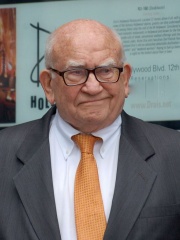 Eddie Asner (; born November 15, 1929), also credited as Edward Asner, is an American actor, voice actor, and a former president of the Screen Actors Guild. He is primarily known for his role as Lou Grant during the 1970s and early 1980s, on both The Mary Tyler Moore Show and its spin-off series Lou Grant, making him one of the few television actors to portray the same character in both a comedy and a drama. He is the most honored male performer in the history of the Primetime Emmy Awards, having won seven, five for portraying Lou Grant (three as Supporting Actor in a Comedy Television Series and two as Lead Actor in a Dramatic Television Series). Read more on Wikipedia

Since 2007, the English Wikipedia page of Ed Asner has received more than 4,246,538 page views. His biography is available in 52 different languages on Wikipedia making him the 1,630th most popular actor.