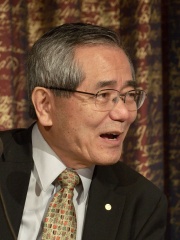 Ei-ichi Negishi (根岸 英一, Negishi Eiichi) is a Manchurian-born Japanese chemist who has spent most of his career at Purdue University in the United States. He is the Herbert C. Brown Distinguished Professor and Director of the Negishi-Brown Institute at Purdue. He is best known for his discovery of the Negishi coupling. He was awarded the 2010 Nobel Prize in Chemistry "for palladium catalyzed cross couplings in organic synthesis" jointly with Richard F. Read more on Wikipedia

Since 2007, the English Wikipedia page of Ei-ichi Negishi has received more than 139,392 page views. His biography is available in 48 different languages on Wikipedia making him the 189th most popular chemist.

Among CHEMISTS In China