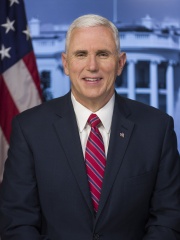 Michael Richard Pence (born June 7, 1959) is an American politician, broadcaster, and lawyer who served as the 48th vice president of the United States from 2017 to 2021 under President Donald Trump. A member of the Republican Party, he previously served as the 50th governor of Indiana from 2013 to 2017. Pence was also a member of the U.S. House of Representatives from 2001 to 2013. Pence was born and raised in Columbus, Indiana, and is the younger brother of U.S. Read more on Wikipedia

Mike Pence is the Vice President of the United States. He was elected to the position in November 2016.

Among politicians, Mike Pence ranks 4,037 out of 15,577. Before him are Haakon III of Norway, Prince Eitel Friedrich of Prussia, Venustiano Carranza, Alfonso V of León, Frank Lentini, and Vojtech Tuka. After him are Maurice Thorez, Grand Duchess Maria Nikolaevna of Russia, Erwin Piscator, Eumenes III, Otto Georg Thierack, and King Huiwen of Qin.