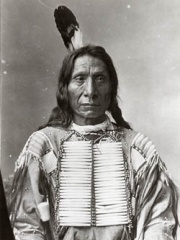 Red Cloud (Lakota: Maȟpíya Lúta) (born 1822 – December 10, 1909) was one of the most important leaders of the Oglala Lakota from 1868 to 1909. He was one of the most capable Native American opponents whom the United States Army faced in its mission to occupy the western territories, defeating the United States during Red Cloud's War, which was a fight over control of the Powder River Country in northeastern Wyoming and southern Montana. Read more on Wikipedia

Red Cloud was a chief of the Oglala Lakota Sioux in the late 19th century. He led his people in the Red Cloud War, a series of battles with United States troops over control of the Powder River Country of Nebraska and Wyoming.

Among politicians, Red Cloud ranks 3,819 out of 15,710. Before him are Atropates, Leopold I, Margrave of Austria, Abdul Salam Arif, Karl August, Grand Duke of Saxe-Weimar-Eisenach, Herod II, and Sigfrid Edström. After him are Giacomo Matteotti, Francesco Morosini, Cuitláhuac, Henri Christophe, Suleiman of Persia, and Empress Jitō.