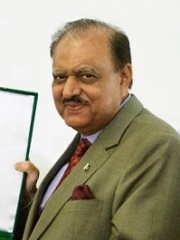 Mamnoon Hussain (Urdu: ممنون حسین; 23 December 1940 – 14 July 2021) was a Pakistani politician and industrialist who served as the 12th president of Pakistan from 2013 to 2018. He was first appointed Governor of Sindh in June 1999 by President Rafiq Tarar; but was removed from the post in October 1999 due to the 1999 military coup d'état. Hussain was then nominated for the presidency by the Pakistan Muslim League party (PML(N)) in July 2013 and was elected through an indirect presidential election. Read more on Wikipedia

Among politicians, Mamnoon Hussain ranks 5,118 out of 15,710. Before him are Edward Gierek, Prince Frederick of the Netherlands, Publius Cornelius Lentulus Sura, Alberto Fernández, Catherine of Bosnia, and Theodora. After him are Yaropolk II of Kiev, Luigi Facta, Bess Truman, John Dickinson, Princess Maria Clotilde of Savoy, and Princess Muna al-Hussein.